You are here: Home / Saltwater / How Fast Do Blue Tangs Grow? (Everything To Know) 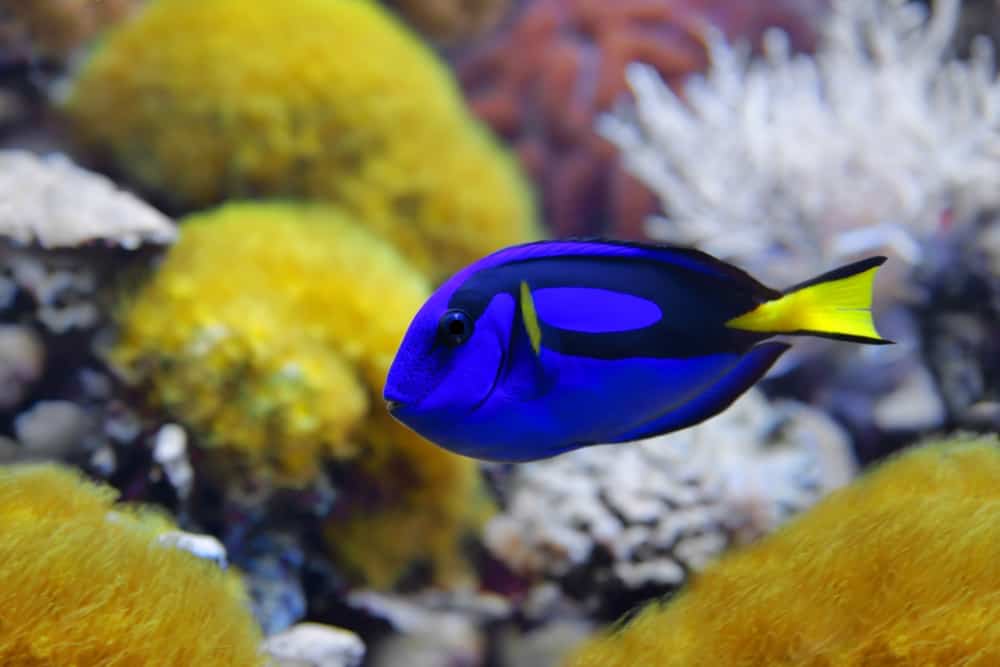 Almost all marine aquarium owners love to have Blue Tangs in their collection.

However, few can succeed in keeping them happy and healthy.

One of the main reasons is that they can’t provide the Tang with proper space to grow.

Since they’re active swimmers, they also need a lot of space.

Knowing their growth rate can help you determine how big of a tank you need to keep them comfortable.

Read on to find out how fast they grow and other useful information for keeping Blue Tangs.

How Fast Do Blue Tangs Grow? 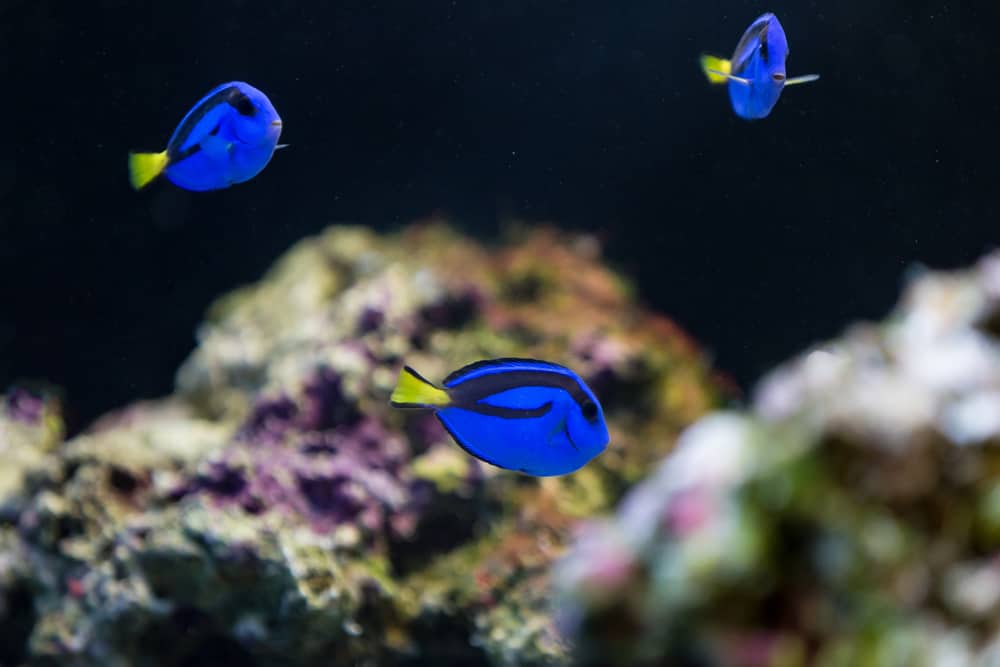 Blue Tangs grow an average of two inches per year in the first few years of their lives.

Then their growth slows down to one inch every year.

This rate can vary depending on the Tang’s living environment, diet, water quality, temperature, oxygen concentration, and other factors.

What Is a Blue Tang? 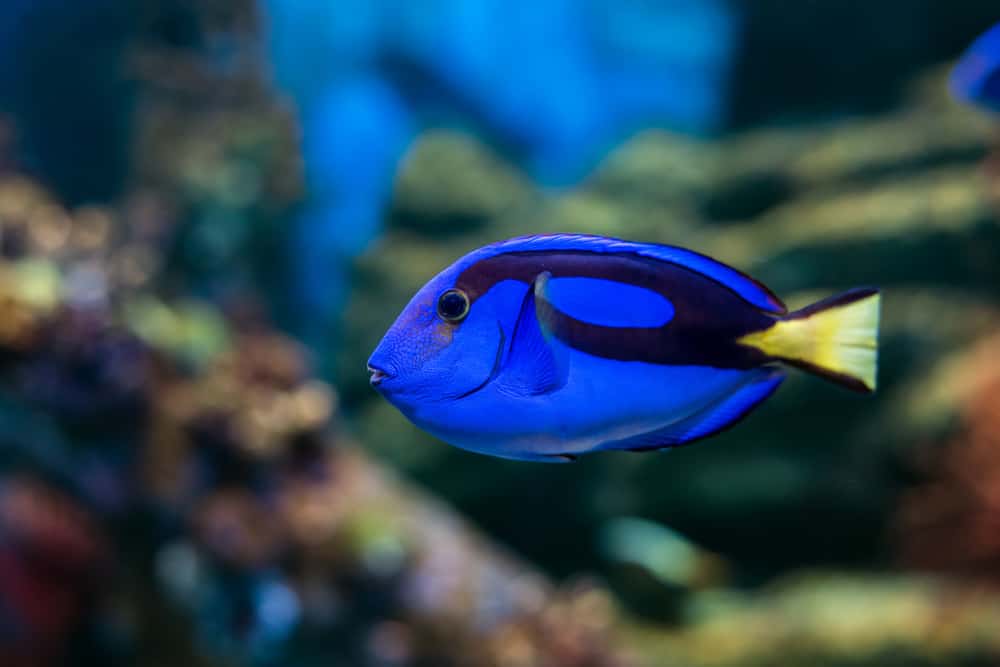 The Blue Tang is a gorgeous member of the surgeonfish family.

These active swimmers are one of the most sought-after fish among fishkeeping hobbyists.

With their unique shape and coloring, they can bring life to any marine aquarium setup.

Interestingly, Blue Tangs have bright yellow bodies with blue spots near their eyes.

Their coloration shifts to a royal-blue body, yellow tail, and bold black markings as they grow.

They change to a pale blue or violet hue at night and when they’re spawning.

Much like all other surgeonfish, these seemingly harmless creatures have a pair of sharp, venomous spines on both sides of their tails.

When in danger, they erect these spines to protect themselves against predators.

Let’s find out why! 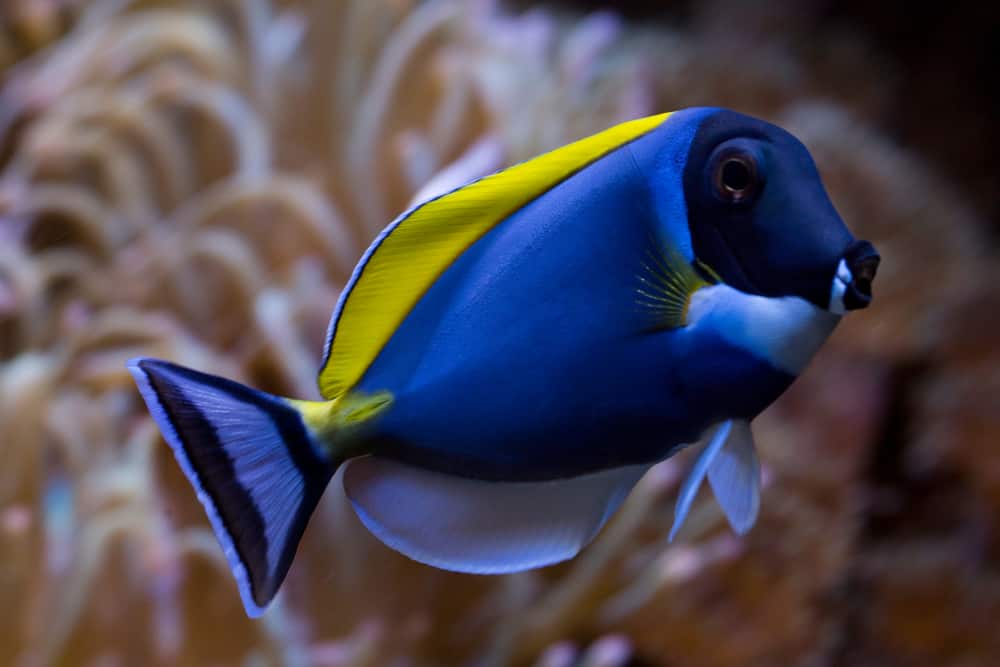 Some surgeonfish species look similar to the Blue Tang and are often mistaken for them.

However, they have different growth rates, mature sizes, personalities, and needs.

When buying a Blue Tang, be careful not to mistake it with a Doctorfish, Ocean Surgeonfish, Powder Blue Tang, or Atlantic Blue Tang. 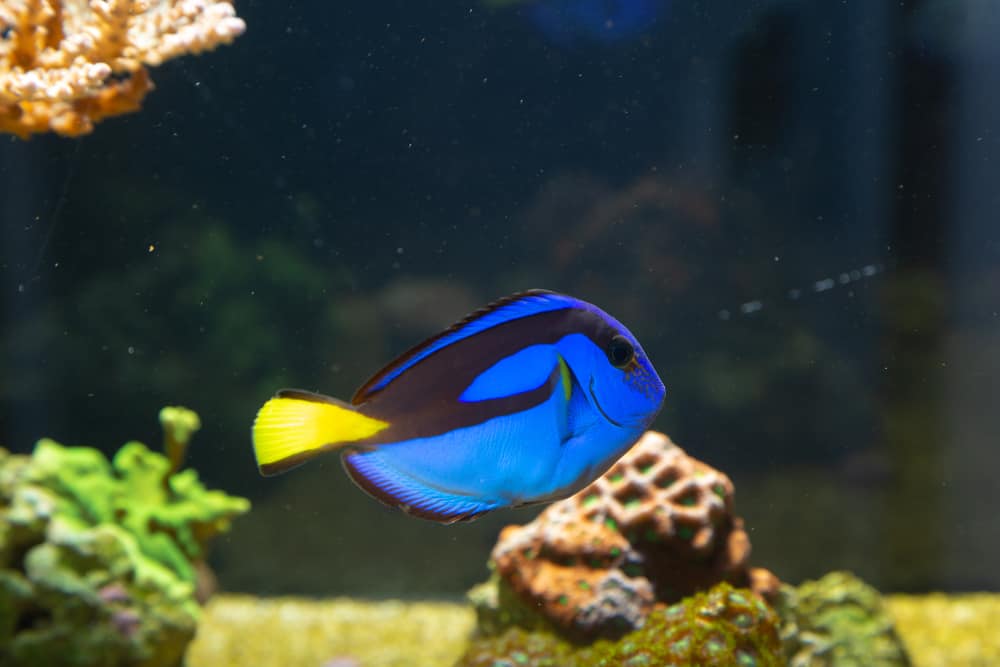 When you get fish at a young age, you can keep them in a small tank without any problem.

However, as they grow, they’ll need more space to remain healthy.

If they get cramped in an aquarium, they can become stressed and prone to many diseases.

They may also become aggressive and territorial towards their tankmates, causing distress and injuries.

Overpopulating a tank can also affect the water quality and other water parameters.

That’s why, when purchasing a fish, you should consider its grown size so that you can house it in a big enough tank from the beginning.

You could also level up the tank as it matures.

However, a fish’s growth rate isn’t a fixed number.

It depends on many factors, including:

After a few years, their growth slows down to one inch per year.

They can grow up to 12 inches, and since they’re highly active, their aquarium should be at least 100 gallons.

Given the proper living conditions, a Blue Tang can live up to 20 years. 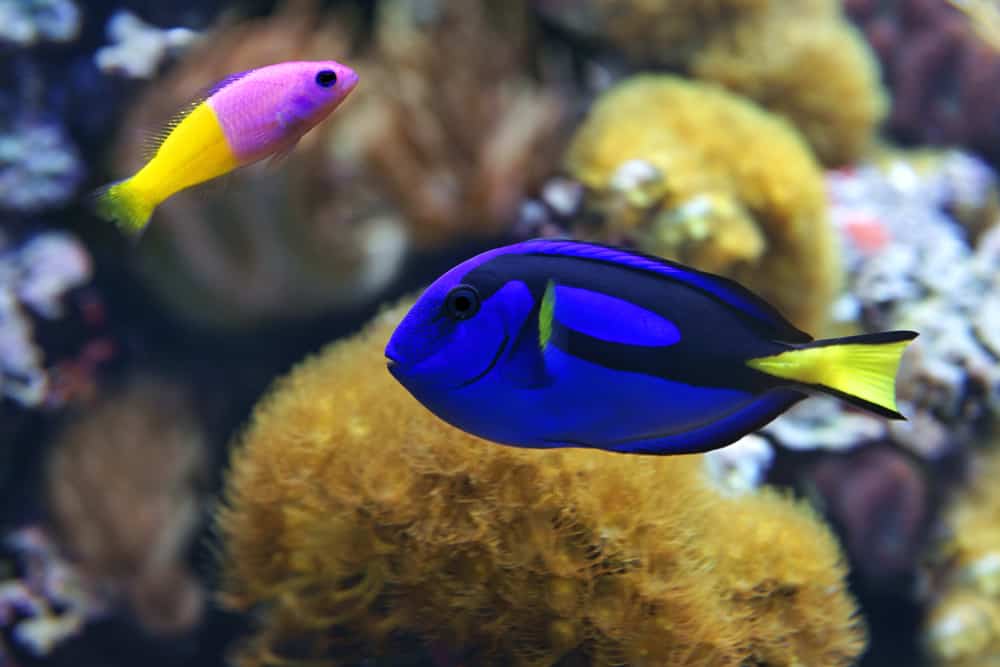 Tangs swim around and eat all day, producing lots of waste.

They’re also sensitive fish which require the water quality to be just right.

Make sure your tank is completely established before introducing a Blue Tang into the system.

Going through a nitrogen cycle puts too much stress on a fish as sensitive as a Blue Tang.

Therefore, plan for a powerful filtration system and a strong skimmer.

To remove the nitrate and phosphate released by the decaying waste, install chemical filtration and keep a refugium.

Adding an ozonizer to your setup can help the ecosystem a lot.

It speeds up breaking down the organic pollutants and prevents the growth of parasites and pathogens.

You need to keep the water moving for a Tang.

A strong flow will mimic the Tang’s natural habitat and keep them happy.

They may be shy when you first introduce them to the aquarium.

You can help them feel at home by providing rockwork and décor as hiding places. 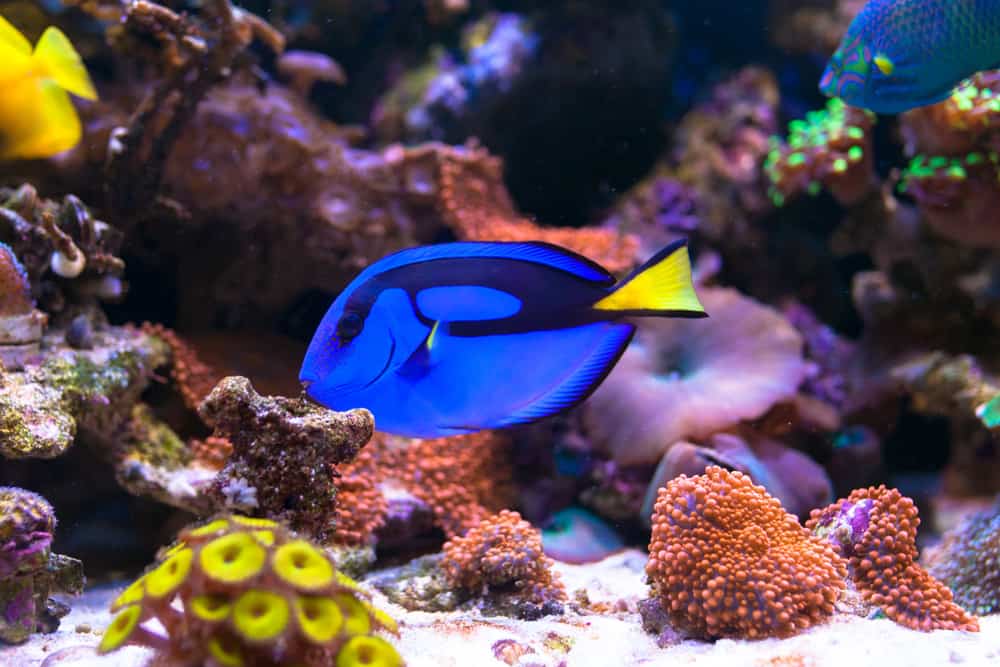 Blue Tangs come from the Pacific Ocean and the Indian Ocean.

They live along the shores where the coral reefs grow.

You can mostly find them in the shallow parts of the sea because they get the most amount of light there, and more algae grow on the corals.

Blue Tangs are omnivorous, and they feed on plankton as juveniles.

As they grow, they start to feed more and more on algae.

Algae could grow on corals and kill them eventually, but Tangs help the ecosystem by grazing on lush algal growths.

They benefit a lot from eating dried algae sheets and nori sheets treated with supplements for better nutritional value in captivity.

Keep their diet balanced with occasional meaty treats such as brine shrimp and Mysis.

Attach marine seaweed and terrestrial greens like lettuce and spinach to the side of the tank for them to munch on.

They’ll also love having macroalgae from the refugium as snacks. 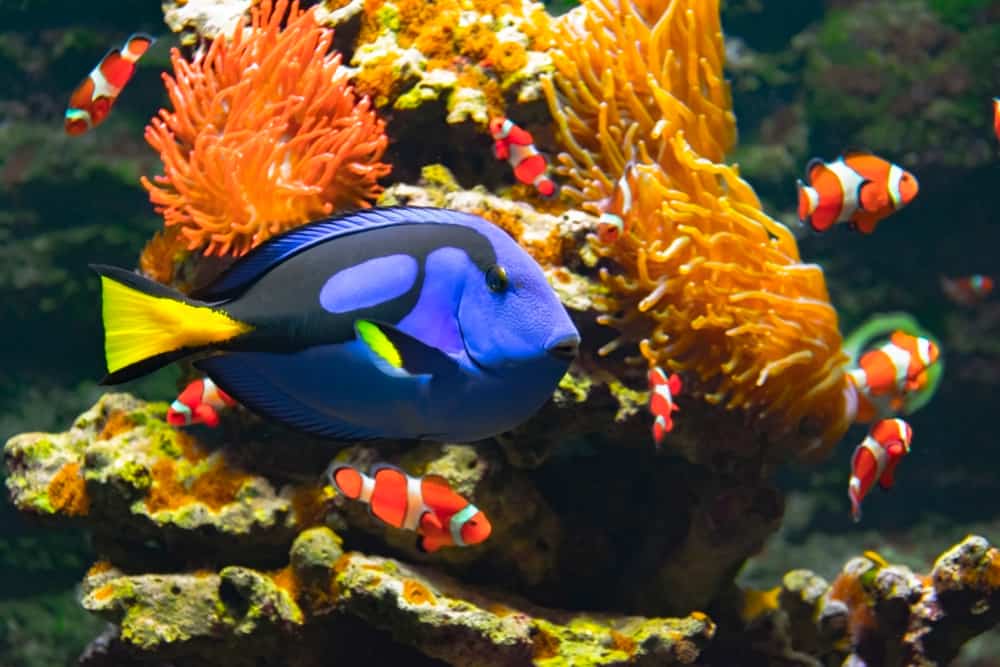 Blue Tangs are one of the most peaceful surgeonfish species.

They tend to school together and form large groups with all tang species as juveniles.

However, as they grow, they usually become more aggressive towards their kind.

They could also pick fights with similarly sized and shaped fish such as angelfish or butterflyfish.

Therefore, it’s wise to keep only one in each tank unless you have a massive tank with lots of hiding places.

If you really want to keep a couple of Tangs together, introduce them to the tank at once.

Don’t put two males in an aquarium, as they’ll get into sword fights with their venomous spines.

One of Blue Tang’s interesting traits is that it “plays dead” whenever it runs across a predator.

It lays on its side on the ground and stays motionless until the danger passes. 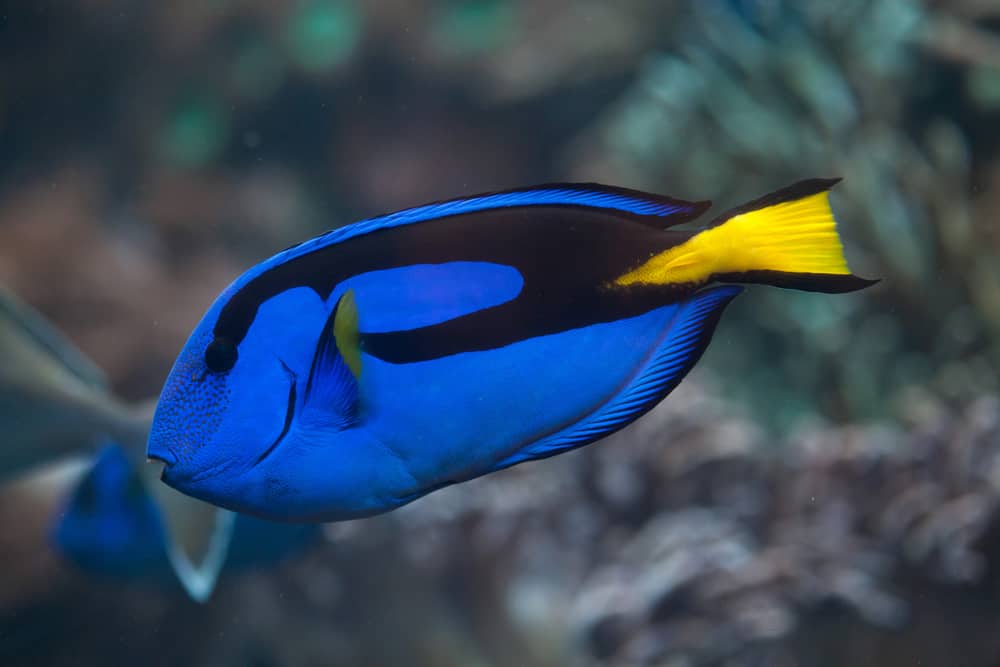 Once acclimated, Blue Tangs become resistant to most diseases.

However, if there’s any invading parasite or bacteria in your aquarium, Blue Tangs are the first to show signs of infection.

Poor water quality and tank conditions can make them prone to diseases like marine ich and MHLLE.

MHLLE stands for Marine Head and Lateral Line Erosion, and it can cause soft tissue damage for the head, lateral line area, and dorsal fin rays.

Some believe that active carbon in the filter causes this illness.

When keeping Tangs, having a quarantine tank for the new purchases becomes necessary.

Whether it’s a new fish, invert, or coral, it’s wise to keep them in a quarantine tank to ensure they won’t bring any parasitic or bacterial infections to the main tank.

After all, prevention is always easier! 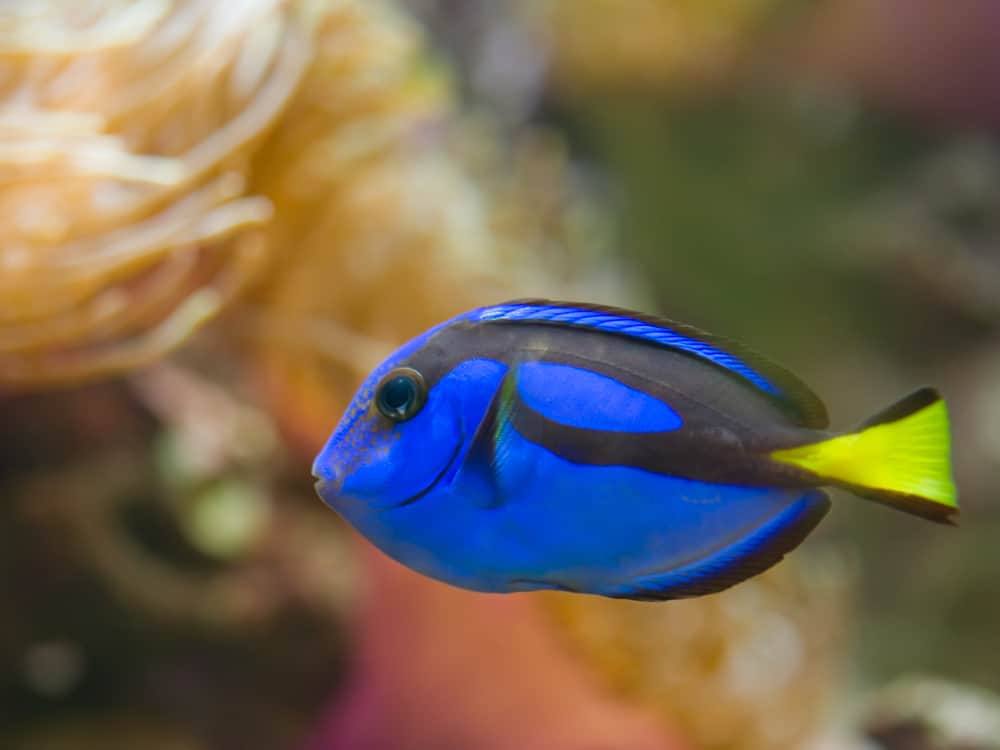 Since the Blue Tang is in high demand among aquarists, it’s been targeted and caught for many years.

It’s only been a few years since fish keepers learned to breed Blue Tangs in captivity.

All the population for trade in the market was wild caught before that.

The process of catching the fish hurts both the corals and the bait.

On the other hand, there’s a concern about habitat loss with Blue Tangs.

The destruction of coral reefs may put them in danger soon.

Also, humans consume Blue Tangs in some parts of the world.

Despite all of this, the IUCN doesn’t classify the Blue Tang as an endangered species. 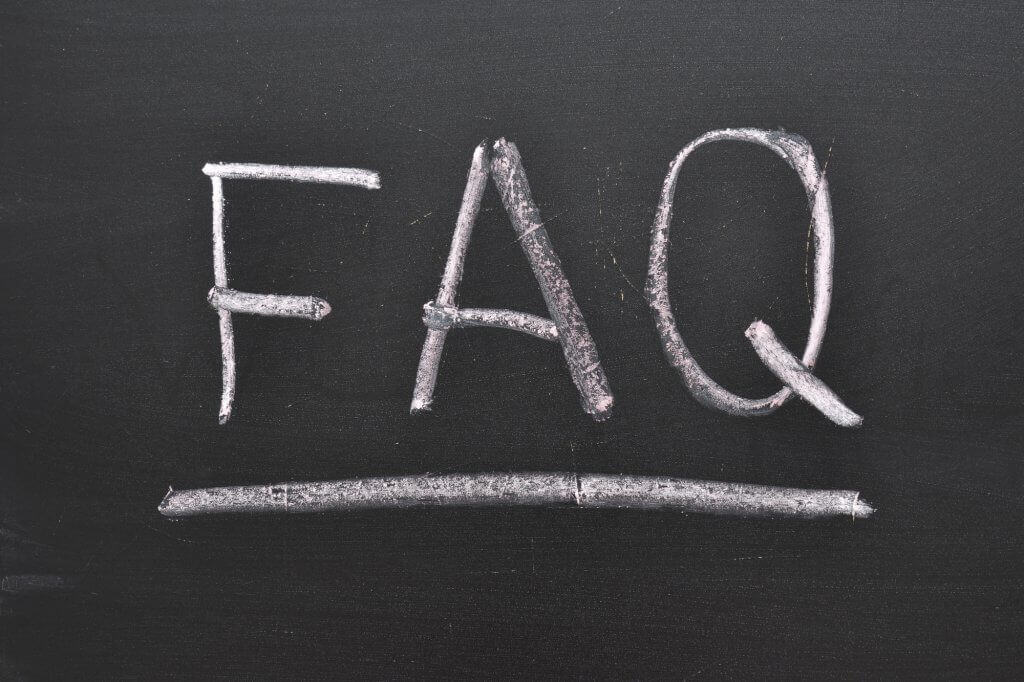 1. How Big Do Blue Tangs Grow?

Some can even reach 14 inches.

However, that’s quite unlikely when you keep them in captivity.

Ultimately, their size depends on how well you feed them, how big their tank is, and how appropriate their living conditions are.

2. How Long Do Blue Tangs Live?

Blue Tangs can live a minimum of eight years in captivity since they’re less likely to get sick or killed by predators.

That number could go up to 20 years if their living conditions are well cared for.

3. How Many Gallons Do Blue Tangs Need?

As the rule of thumb, you need to have at least one gallon of water for every inch a fish grows.

Since Blue Tangs can reach a max of 12 inches, they need more than 100 gallons of water to swim freely and remain healthy. 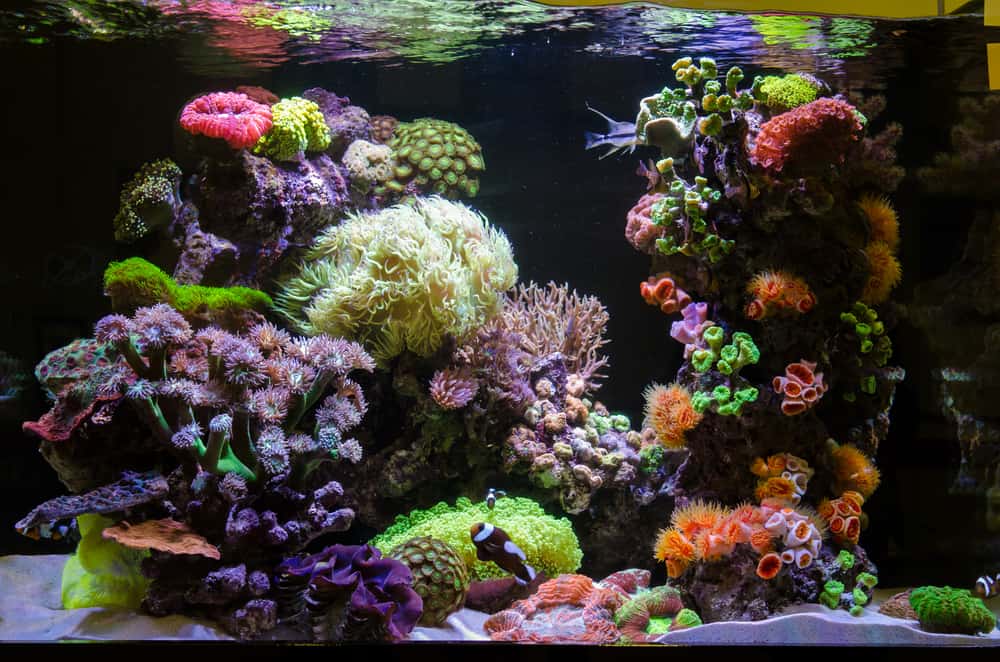 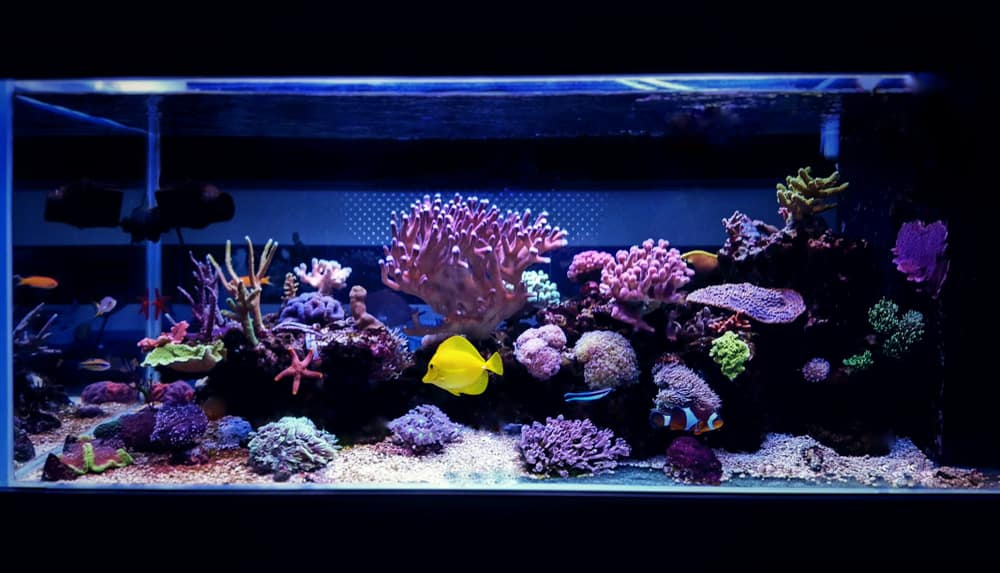